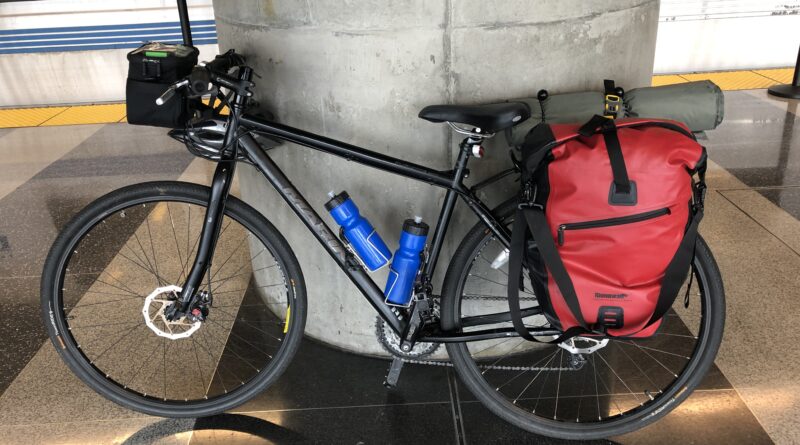 In June of 2021 I took a trip down the California coast. As expected it didn’t go as expected. Just like life. I kept a journal over the course of the trip and here it is.

Chieko got me to the airport around 8pm. The flight was uneventful. I slept during the whole thing despite being jammed into economy. I assembled my bike in SFO minus my CO2 cartridges. Thanks TSA. I hopped on the BART and bus to Pacifica. Everyone in SF has been so pleasant. They have they’re own version of aloha here.

The ride has been tough. First my racks are screwing up and cheap. I should have bought better. I made my distance goal for the day but it was much harder then I anticipated. At the end of my day I went to Pescador to look for food and water. I happened to meet a cool guy named Ben. He invited me up to his place and we chatted about life. He works on a dairy farm. Super nice guy inviting a total stranger into his house to fill his water bottles. The world is still full of good people. In fact the world has much more good people then bad. I must never lose sight of that.

Part of having a plan is being flexible in the plan and also trusting in gods will. The good old fashioned EGBOK theory. Everything’s gonna be OK. I was coming into Monterey and was having trouble with my deraileur. The mechanics fixed up my bike and gave me some info on a shortcut around pebble beach. It was a lot of climbing and I finally got there and I realized I wasn’t really ready to tackle Big Sur. 50-60 miles unsupported is advanced and I am intermediate at best.

At this point I decided I would head back to Monterey and get a hotel and regroup. This was about a 15 mile trip in the wrong way. I got totally lost going back to Monterey. My GPS took me through private property which I couldn’t go. I ended up on a very busy Hwy 1. At that point I didn’t care if I got hit by a car. I had peddled over 60 miles two days in a row so my legs were really cooked.

I eventually arrived at my hotel and went to whole foods and bought a chicken and ice cream and passed out. This all happened yesterday. Today I changed the plan and decided I was going to camp at veterans memorial and just relax. Ive met a couple of other bikepackers and one of them also has a YouTube channel. It was nice to talk with them and talk out some of my uncertainties and fear of cycling Big Sur. Tomorrow I will peddle to Salinas and then take the Amtrak to SLO. I will get a hotel in SLO then start going south.

What a night! Cold and rural. I was between Arroyo Grande and Guadalupe and it was getting dark. I asked a local where I could pitch a tent for the night and he suggested a local park. Not having much choice I went and checked it out. It was far more exposed then I imagined and there was still quite a few people in the park so I went and looked at the other areas. Nothing else looked good so I threw my mat down and slept for the night. In total I probably only slept 3 hours. Prior to that I ran into a really interesting woman.

I was asking her for directions and she got really close to me and I offhandedly said “Don’t worry, i’m vaccinated.” She replied “I’m not!” then she started going on about the virtues of urine therapy and the fake news. Anyways she was fun. I should have asked her if she got her Qdrops.

After about 3-4 hours of sleep I woke up and packed my stuff. I hardly slept because of the cold. It sucked. I rode the 166 East to Santa Maria where I popped into a starbucks. I drank some coffee, charged my devices and took a big dump. I felt terrible while I was riding to Santa Maria but once I drank some hot coffee and had a poop I was good to go.

The second leg of the trip was from Santa Maria to Lompoc. There were some steep climbs but overall I felt good. I peddled around Lompoc and had an amazing juice. It was served by the sweetest shop owner and was delicious. After the juice I grabbed a carne asada burrito to bring with me to Gaviota. The ride to Gaviota was much harder then I expected. It was just climbing, climbing and more climbing. Also the sun was out in full force and I really though the final leg was never going to end. I had to stop once for a break but aside from that it was ok.

When I arrived at Gaviota Beach I didn’t expect them to have any hiker/biker sites but alas they did. I paid the fee and went down to the beach for a bodysurf and ate my burrito. Life is good! It had been cold for so long it was nice to get some sunny weather.

Had a fantastic night sleep but my Bivvy doesn’t breath well so I woke up and was wet from condensation of me breathing. I left later then usual and got on the road around 8:30 and the sun was already out in full force. Like an idiot I lost my sunblock. The riding was partially on the 101 which was stressful but the other half was through bike trails in Goleta and Santa Barbara which was really nice.

The bike infrastructure through Goleta and Santa Barbara were absolutely amazing. Buttery smooth roads and no cars. It was awesome. I had a nitro espresso in Goleta and some shitty Italian food on State Street in Santa Barbara. On the way out I stopped by Trader Joes and grabbed some burritos and a salad. The salad was the first veggies ive eaten in a week. I met a few cool people today. One was a really nice family who was car camping and gave me a senbei and another Santa Barbara local name Mike who I rode with for about 15 miles.

After Fueling up I rode an easy 10 miles down to Carpinteria campround where I set up for the night.

I woke up in Carpinteria after a good sleep. I was keenly aware as I got closer to LA I would need to keep a better eye on my stuff. I started peddling while eating breakfast from my trader joes food. The weather was great and the bike paths during this part of the trip were fantastic. I had great views of the Pacific the whole way. I arrived in Ventura and grabbed a coffee and a muffin then continued South with the idea of stopping in Pt. Mugu. I made the long slog through Oxnard and around the air force base before seeing a sign that said Santa Monica Mountains.

At this point I had a really good tail wind and didn’t feel like stopping at Pt. Mugu. I was told the next chance for me to stop would be about 15 miles south at Leo Carillo. I started peddling South and the coastline was beautiful. I decided I really wanted to make a push to Santa Monica and get a hotel. I slammed some gels and peddled like the wind. My legs were pretty smoked but the thought of a hot shower kept me motivated.

After some hills in Malibu and some terrifying riding with cars inches from me I started to see signs for Santa Monica. I finally arrived to a protected bike lane and started to cruise into Santa Monica. After several miles of riding on the beach path I arrived at the Santa Monica pier. The pier was so busy. It was almost a shock after going days without seeing a soul. After booking a hotel in nearby Culver City I peddled through Venice and was shocked on the condition. Venice looked like skid row on the beach. It was a shocking disappointment.

Woke up late. Was pretty sore from the previous day. Was anticipating an easy day to Orange County but google had other plans. If there is one thing I learned from this whole experience is to have a dedicated device for mapping and google maps cannot be relied on. I followed google through the backside of Long Beach which turned out to be the port freight area. It was an absolute hellscape on the bicycle. It made for a very long, slow trudge through some of South LA’s finest neighborhood.

I eventually made it back to PCH which dumped me into coastal Long Beach. Which was really busy and also looked really nice. I followed the coast mostly on bike paths until the road opened up in Seal Beach. I cruised along the coast through Huntington Beach and into Newport admiring the opulence in cars and boats. That is one thing that is nice when traveling by bike; it allows you time to see small details that you would miss in a car.

I decided to stop at Crystal Cove for the night. Crystal cove is a rare open beach area in OC. No houses, just nature and a trader joes, starbucks and a alfa romero dealer. This is Orange County after all. All in all it was a good night and I slept well.

I woke up to the pounding surf at Crystal Cove at about 5am. I packed my bike and pushed up the hill to the Highway. I stopped into starbucks and drank a coffee and charged my phone. I was on the road by 730 and my bike was hurting. Today was the final day with Encinitas being the goal. I was going to make a small pitstop in Oceanside to have lunch with a friend and then get a room in Encinitas before taking the train back to LA.

The ride through Laguna Beach and Dana point were tougher than they should have been. There were lots of rollers and every part of my body was feeling it. I couldn’t hold the handlebars in the same spot for too long and I couldn’t sit in my saddle without pain. I rolled into San Clemente around 930 and had an “it’s it” which I forgot about until I saw it in the market. It’s basically an ice cream sandwich dipped in chocolate. A little fuel for the next part of the trip.

I wasn’t sure how passing through USMC property would be but quickly learned I couldn’t get access to the base and for about 8 terrifying miles had to ride on interstate 5. The shoulder was wider so I was more concerned with all the car debris in the should that could puncture my tire. I have never been so happy to see the Oceanside harbor exit sign in my life. Oceanside definitely looks like it has gone upscale and it was really nice seeing Chris if only for a minute.

After lunch I suffered through another 11 miles to Encinitas where I checked into my hotel. All in all it was a great bike trip and for it being my first long distance trip I am really proud how well I did.